2020 — a monumental year. As COVID-19 has gripped the world, altered economics and transformed daily lives, one thing is certain: we have all leaned on mobile to connect, work, learn, play and escape.

At the height of the pandemic our mobile usage has sky-rocketed — accelerating our mobile adoption by 2 to 3 years. As we close the books on 2020, what has happened in mobile? How has this transformed the game for business, and how should businesses prepare to win on mobile in 2021?

Across iOS and Google Play, total spend in mobile apps and games set a new annual record. While 65 cents of every dollar went to iOS, spend in Google Play will grow close to 30% — a trend we’ve reported on for many quarters. iOS maintains the stronghold of global spend, but due to competitive Android devices and a growing device footprint, Google Play has seen sizable growth. 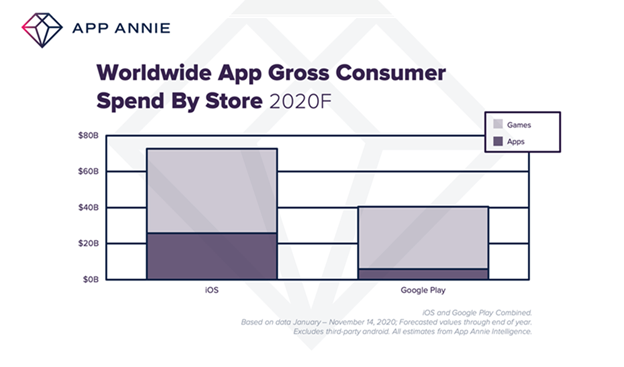 Top markets driving growth for iOS include US, Japan and the UK — which differs from the top markets for growth in iOS consumer spend from 2018 to 2019, including the US, China and Japan. Top markets for growth in spend on Google Play included the US, South Korea and Germany — with South Korea and Germany taking Japan and the UK’s place in terms of growth in Google Play spend from 2018 to 2019.

In terms of categories, $0.71 of every dollar went to games across iOS and Google Play combined — with spending accelerated by this year’s boom in mobile gaming. Among non-gaming categories of apps, in-app subscriptions drove the most growth. Top categories for growth were Games, Photo and Video and Social Networking on iOS and Games, Entertainment and Social on Google Play.

Globally, downloads will approach 130 billion annually across iOS and Google Play. Typically much of this growth is from emerging markets, but in 2020 COVID-19 catalyzed demand for digital solutions to socially-distant problems. As a result, downloads grew 10% year over year, despite more maturity in the mobile market. Global Google Play downloads outnumbered iOS downloads by 160%, but both app stores saw 10% growth year over year. 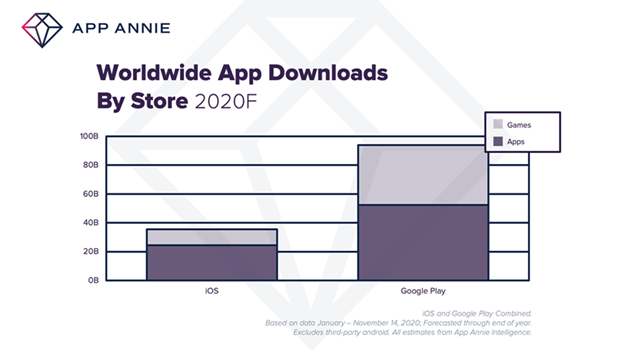 Across both app stores, Games increased their relative level of downloads, representing 40% and of total Google Play and iOS downloads in 2020. Games represented 45% of all Google Play downloads — up from 40% in 2019 — and 30% of all downloads on iOS — which remained constant from 2019.

The biggest categories of growth globally were Games, Business and Finance on Google Play and Games, Business and Utilities on iOS. On a country level, India, Brazil and Indonesia were the largest contributors of growth in downloads on Google Play whereas the US, Japan and Saudi Arabia saw the greatest growth in downloads on iOS.

One of the biggest areas of growth we saw on mobile was in time spent — a product of both more people using mobile apps and spending greater time in them each day. Globally, the biggest categories of growth in time spent include Business apps, up 200% — largely from collaboration and conferencing tools like ZOOM Cloud Meetings.

This, however, does vary by market — underpinning why mobile market data is critical to a business strategy in 2020 and beyond. A one-size-fits-all mobile strategy could leave you open to competitive threats and blind to opportunities. Mobile market data and insights can keep you informed on the latest shifts in the market, changes in consumer behavior and long-term market trends. 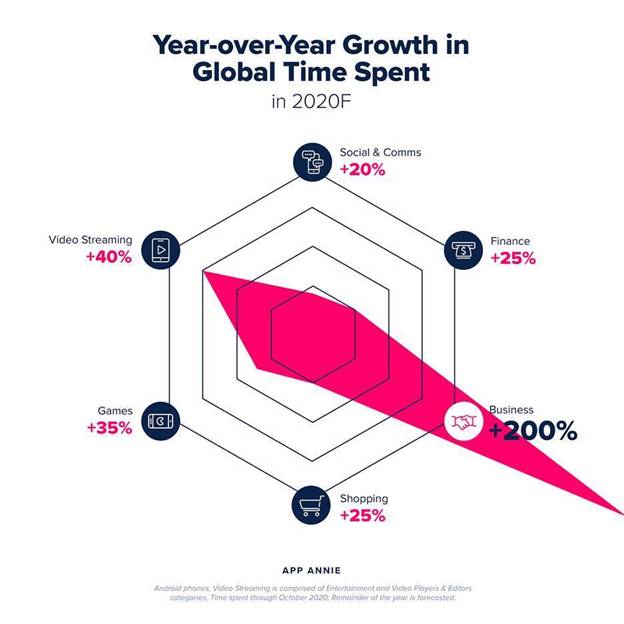 We are poised to see continued strong growth in ‘at home’ mobile services into 2021 — particularly as markets contend with outbreaks and public confidence in containment until the eventual rollout of global effective vaccines. While news in November 2020 looks positive for vaccine development, mobile will remain the central hub of connectivity in the new normal.

Preliminarily, we’ve taken a look at the top apps of 2020 by downloads and app store consumer spend through November 14, 2020 along with average monthly active users through October. We tend to see a seasonal bump in downloads, spend and usage around the holidays and expect full year rankings could shift as a result.Sign up for early bird access to be among the first to see the final top apps of 2020 for the full year in our State of Mobile 2021 Report. 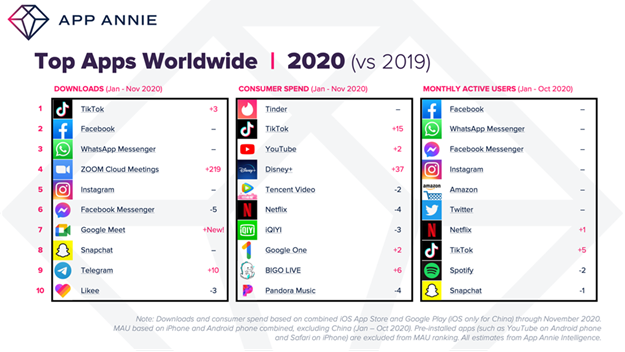 Breakout apps by year-over-year growth in 2020 include:

Among Us, My Talking Tom Friends, ROBLOX and Call of Duty: Mobile See Standout Success in Top Gaming Charts of 2020 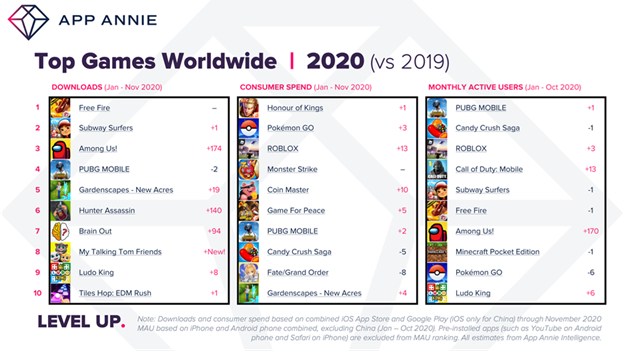 Breakout games by year-over-year growth in 2020 include:

The Bottom Line for Mobile: 2020 Solidified Mobile’s Role in Reaching and Converting Customers

In 2021, it’s about more than simply having a ‘mobile strategy’. Businesses must have a data-backed mobile strategy combining trustworthy and accurate mobile market data with their first-party data and an intelligent data science partner. Mobile data should be the central focus on winning on mobile in 2021.

“2020 has made clear that mobile apps and games are at the center of our lives even when we stay at home,” said Bertrand Salord, Global VP Marketing, App Annie. “To win on mobile, brands and publishers need more than ever to benchmark their own mobile performance to market data estimates.”