By 2025 global 5G mobile subscriptions will hit approximately 2.79 billion, accounting for about 35.8% of the current world population, writes Justinas Baltrusaitis, editor and writer for Buy Shares .

The research further overviewed the global mobile coverage rate by different technologies between 2011 and 2025. The data shows an increase in coverage for both the 5G and LTE technology. In 2011, the LTE network coverage rate was 5% globally while in 2020, the coverage is at 83%. By 2025, the LTE coverage is expected to be 91%. 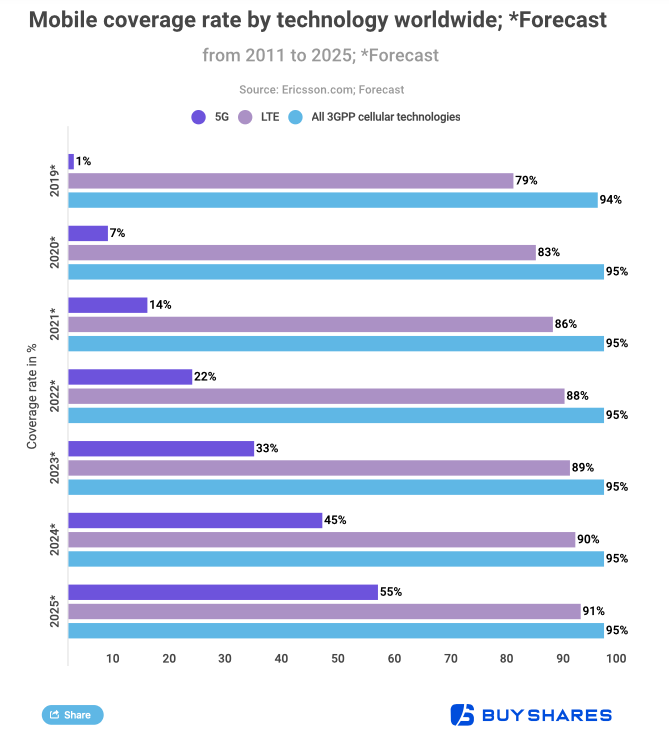 From the data, the North East Asia region is expected to be the hub of the 5G network controlling almost half of the subscriptions globally. Over recent years, the region has undergone a rapid migration in mobile broadband networks and smartphones setting the perfect ground for 5G adoption. In general, the 5G network is likely to be adopted in areas that had embraced the latest technologies like 4G.

The 5G network has been touted to be a game-changer compared to previous generations of cellular networks like the 3G and LTE/4G). 5G mobile technology promises a ten-fold increase in data transmission rates compared to current networks. The capability will be made possible through a higher transmission frequency.

5G differs since its mains focus lies on machine-type communication enabling the Internet of Things (IoT). The capabilities of 5G thus extend well beyond mobile broadband with increasing data rates. With the much-hyped network, the combination of speed, responsiveness, and reach has the potential to unlock the full capabilities of other trends in technology. The network will play a vital role in enhancing the full capability of self-driving cars, drones, virtual reality, and the internet of things.

Although 2020 has witnessed a significant number of 5G subscriptions, the network’s impact might not be fully felt this year. The main hurdle to rolling out the 5G infrastructures lies in the costs. The cost of setting up frameworks to back faster data is high. It is worth mentioning that the current telecom infrastructure must be upgraded and expanded. Some telecom companies might take time to set up the infrastructure considering that they don’t plan to monetize the technology.

Access to the spectrum is also another major challenge to the adoption of the network. 5G requires access to several spectrum bands with different attributes. Spectrum is the radio waves allocated to mobile operators to transmit data. Limited access to different spectrum bands in different locations might slow down the uptake.

Several manufacturers are already producing 5G smartphones but the sales are expected to remain moderate this year. The slow sales will be due to the high cost and lack of network coverage at a national level in most regions.

The growth of 5G technology appears to be moving ahead despite existing concerns mainly from the health perspective. According to critics, the technology has links to certain types of cancer but no concrete evidence has been presented to support the concern. With the emergence of the 5G network, there was a massive international review for relevant radiation safety protocols.