With matches being played to empty stadia, the UK’s Premiere League is streaming more matches online than ever before – and they are now looking at how to use DCB to charge for access, writes Hannah Giles on the Fonix Blog.

Current restrictions have prevented fans from attending sporting venues and stadiums for several months, so it’s no surprise that the Premier League has taken the decision to stream a selection of football matches online.

Matches in October, which have not been earmarked for regular televised coverage, can now be watched live via Sky Sports or BT Sport Box Office, for a fee of £14.95 per match in addition to their existing subscription.

The option to charge to a user’s mobile phone bill was featured alongside traditional card payment options on the BT Sport Box Office website. Consumers selecting the carrier billing option were able to charge the pay-per-view content to their mobile phone bill, without needing to enter any card details — secure and convenient.

The first of many fixtures, featuring carrier billing was Chelsea verses Southampton, which took place at the weekend. We are looking forward to more sporting events utilising mobile carrier payments, enabling more viewers to participate in the live action from the comfort of their own home. 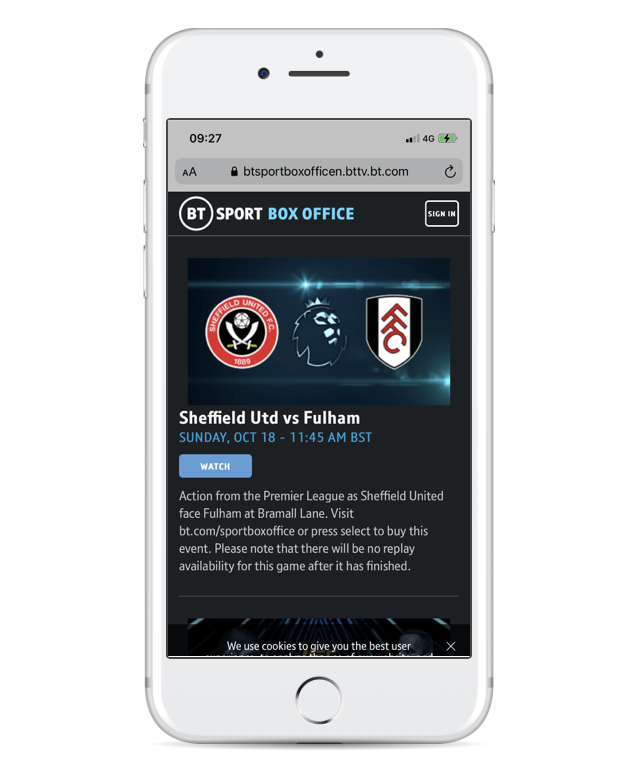 Our thoughts: the beginning of a real DCB boom

The move taps into the long-awaited nascent demand for using carrier billing for access to sports and other content. Driven by the pandemic’s forcing of consumers to have to access most things via the web or mobile, carrier billing has a huge opportunity.

In fact, the DCB platform market is set to grow at a healthy CAGR of 13.5% between 2019 to 2026, thanks to the rising adoption of subscription video e-sports and live streaming, according to the Direct Carrier Billing Platform  Market report from Data Bridge Market Research. Year-on-year growth for 2019 was 11.41% – and this is rising steadily, with 52% of growth coming from APAC.

The research goes on to outline how increasing adoption of subscription based digital content is driving the market growth, while high-speed internet and cloud computing infrastructure has also led to rapid market growth – which is set to continue over the forecast period.

Fonix has been pivotal in getting these sorts of mainstream services to market – already adding DCB to the Fishing Channel, the National Trust and TV player, Alchemie’s streaming service.

Most of the clubs welcome the move and it will help the clubs plug the £100 million a month hole they face with grounds closed to spectators.

There is some controversy, however, over the actual plan to charge – not the use of carrier billing – with many fans feeling aggreieved that after six months of free access they now have to pay. Many season ticket holders are also feeling that they should be exempt.