?>
You are at:Home»Media & Content»Disney+ has the potential to make a strong entrance in the UK
By Paul Skeldon on 11 February 2020 Media & Content, Platforms & Technology, News

As Disney+ gears up to launch, the UK video on demand market faces major changes – and the users are ready.

More and more major film and television brands are joining the band of VoD- streaming platforms and launching their own services. Disney+, in particular, is expected to ignite further competition. Up to 7.6 million VoD fans in the UK are already indicating that they want to use Disney+ when it launches at the end of March.

However, more services will also result in increased user migration in the future: UK VoD users subscribe to an average of only two streaming services and want to spend no more than around £17 a month on them. Exclusive content will become ever more important.

These are the results of a recent nationally representative survey amongst 3,363 UK adults aged 16+, conducted via the international video-on-demand analysis platform VOD-Ratings (www.vod-ratings.com) by the Goldmedia research and consulting group.

Disney+ has the potential to reach a large number of users

The announcement of the launch of the UK Disney+ service months ago has generated a lot of interest amongst VoD users. 59 percent of users have already heard about the launch of the new streaming service. The willingness to subscribe to the service is high with around 35 percent of VOD users indicating they would use the service when it launches. This corresponds to a potential of 7.6 million users (including password sharing). (See Chart 1, below). 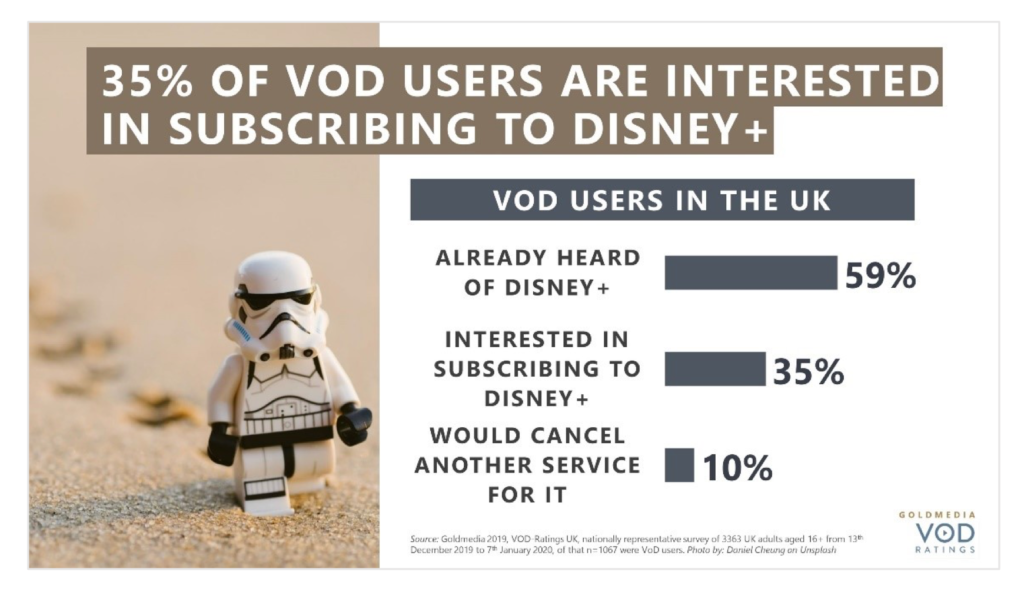 The battle between Disney+ and Netflix may not materialize

Most potential Disney+ customers want to subscribe to the service in addition to existing subscriptions (71 percent) and less than a third want to cancel another service for it (29 percent). However, Netflix would not be the most affected by user migration, as is often predicted. Only 2 percent of Netflix users are considering leaving the service for Disney+. According to the survey,

Now TV and Prime Video are more likely to be affected with 9.7 percent of NowTV users and 7 percent of Prime Video users considering leaving these services in favour of Disney+. Considering this, the planned integration of Disney+ on the Sky Q platform, as has already happened with Netflix, appears to be a good countermeasure.

The key question for the future is how many streaming services viewers will subscribe to in parallel and what they are willing to pay per month. Most viewers in the UK currently do not want to subscribe to more than two services: for 70 percent two is the maximum number. On average, VoD users in this country are prepared to pay £17 per month for video streaming. (see Chart 2, below). 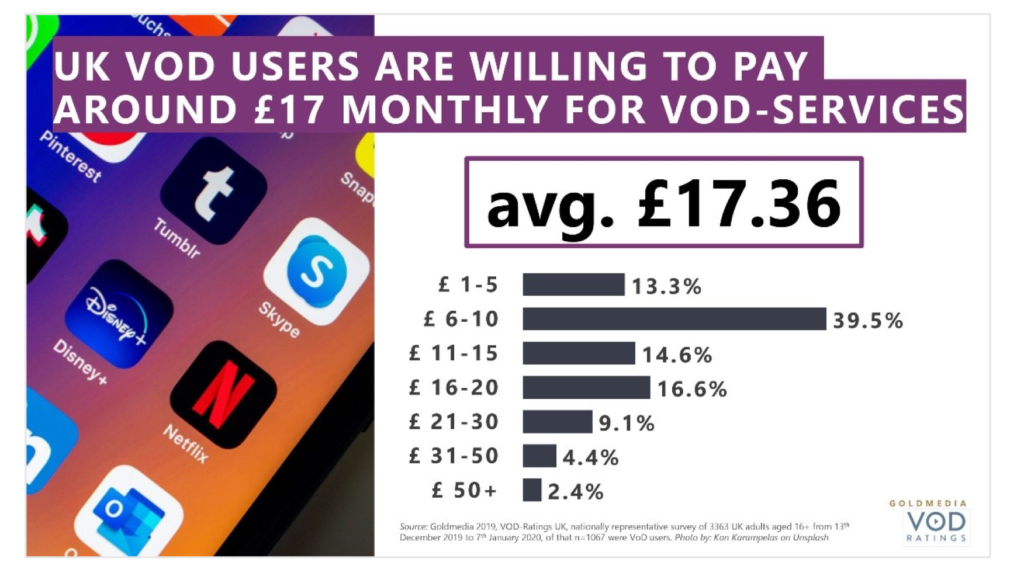 With increased competition in the streaming market about half of VoD users are willing to adapt their usage patterns accordingly. Many are willing to change their services more frequently – to whichever is currently providing the most exciting content. Content exclusivity plays an important role here: for 16.2 percent of UK VoD users this would be a reason to switch service. “Password sharing” is also likely to become even more relevant, as 15.8 percent of users want to make more frequent use of this option in the future. 14.9 percent of users would be willing to subscribe to another service in order to be able to view their favourite content. Advertising-financed platforms will also continue to gain importance, with 9.2 percent of users increasingly switching to these types of services.

Illegal streaming is mentioned more frequently as an alternative, especially by young people. Overall, 8.5 percent of VoD users will revert to streaming illegally more often if the content they want to watch is not available on the services they have already subscribed to.

Dr Florian Kerkau, Managing Director Goldmedia Research, says: “New streaming offers make the overall market more attractive. This will also be reflected in a strong increase in usage. In addition to Disney+, we expect further leading companies to enter the market in 2020. That will make streaming even more successful overall. We continue to follow these developments very closely with our analysis platform VOD-Ratings.com as the independent voice in the market in many European countries.”