Downloads for iOS and Google Play combined reached nearly 26 billion worldwide, growing more than 8% year over year – with both stores reaching record levels of sales and consumer spend. This number is particularly notable as it includes only new downloads and does not count reinstalls or app updates.

Even more impressively, worldwide consumer spend for iOS and Google Play combined experienced more than 3x the growth rate we saw for downloads. In Q3 2017, it reached nearly $17 billion with year over year growth of 28%. In addition, app usage continues to increase at a significant pace. Total time spent in apps worldwide among Android phone users grew 40% year over year coming close to 325 billion hours in Q3 2017. 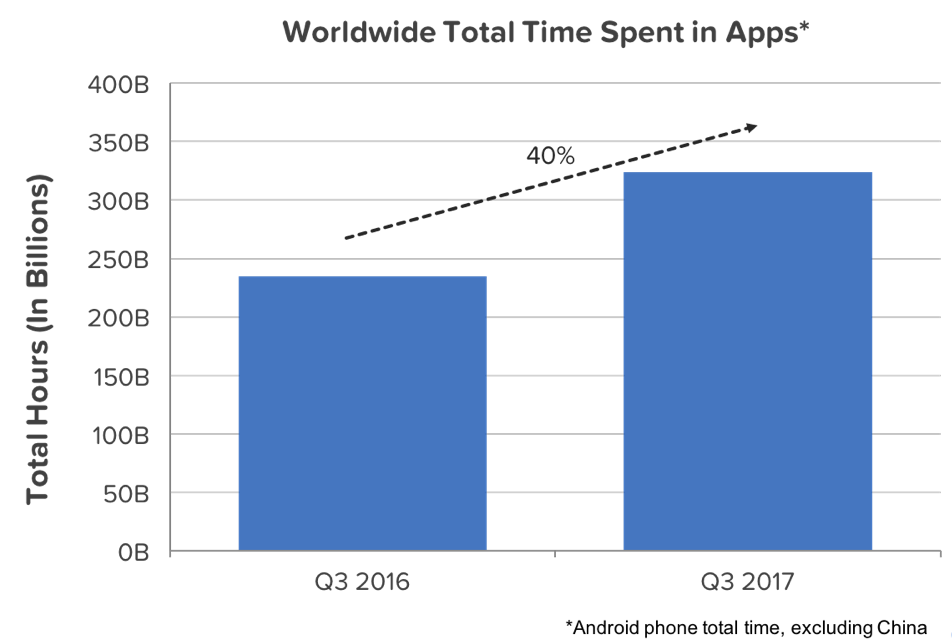 The growth in downloads and usage proves that apps are becoming increasingly central to people’s lives, and this value is translating to rising revenue for the industry.

As with previous quarters, Google Play maintained a healthy lead over iOS for worldwide downloads in Q3 2017. In fact, the gap widened to 125% compared to 115% in Q3 2016. This was the result of Google Play’s nearly 10% year over year download growth, outpacing that of iOS. Continuing a long-standing trend, download growth on Google Play was fueled by emerging markets. The ongoing influx of first-time smartphone owners in these countries has been a significant driver of this growth. Given that these markets still have a relatively low level of smartphone penetration, we expect these trends to continue for the foreseeable future. 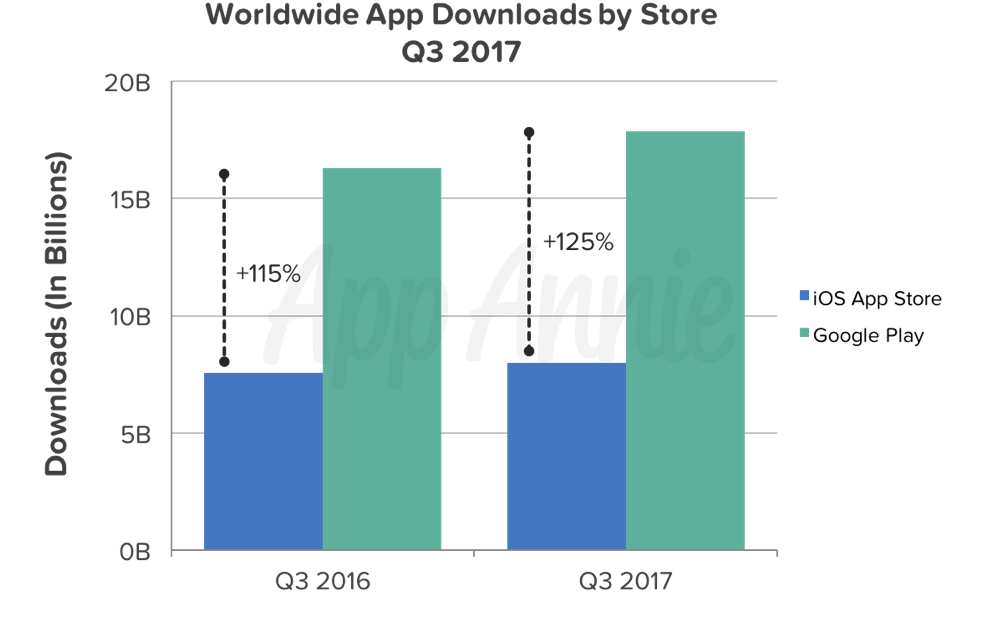 India, the largest market for Google Play downloads since Q4 2016, was the biggest contributor to absolute download growth by a wide margin. Coinciding with the disruptive launch of Reliance Jio’s network in September 2016, Google Play downloads in this country have increased at a staggering pace. In Q3 2017, they were nearly twice as high as those in Q3 2016.

In addition, Southeast Asia, namely Vietnam and Indonesia, was another key source of Google Play’s year over year download growth. Both countries experienced double-digit growth rates, with Indonesia holding onto its 4th place ranking and Vietnam moving up one spot to 7th place in Q3 2017.

over Q2 2017, its highest quarter over quarter growth rate since Q1 2016. As in previous quarters, China continued to lead the charge. It experienced the highest quarter over quarter market share growth for any market, followed by the US and Saudi Arabia. Furthermore, the Saudi government’s recent easing of restrictions on messaging apps in September 2017, are part of a larger set of reforms that are expected to drive further app growth in the country in the future.

While the growth of downloads continues to be driven by new smartphone owners, the healthy growth of consumer spend demonstrates the ever-increasing value that both new and seasoned users are receiving from apps. In Q3 2017, worldwide consumer spend on iOS was nearly double that of Google Play as it increased its lead compared to Q3 2016. Both stores, however, reached record levels as they experienced impressive year over year growth rates above 25%.

On iOS, China continued to be the dominant force for consumer spend. In Q3 2017, it was not only the largest market overall, but it also experienced the highest year over year growth for both absolute spend and market share. South Korea also stood out in Q3 2017, posting the second highest market share growth and moving up two spots to 4th place, its highest ever ranking in the overall quarterly country ranks.

While emerging markets drove download growth on Google Play, mature markets continued to propel its consumer spend. In Q3 2017, South Korea stood above the rest, generating the largest quarter over quarter gains in absolute downloads, as well as market share. It was followed by Canada and Germany which experienced the second and third highest quarter over quarter market share growth, respectively.

South Korea’s strong Q3 2017 performance on both iOS and Google Play was largely driven by Lineage M, a highly anticipated mobile game from NCSOFT based on its extremely popular massively multiplayer online role-playing (MMORPG) PC franchise Lineage. Launched at the end of Q2 2017, the game experienced immediate success, which it maintained to become the highest grossing app, by wide margins, on both iOS and Google Play in Q3 2017.

In terms of categories, Entertainment had standout success in Q3 2017 on both iOS and Google Play. Worldwide consumer spend in this category grew 30% quarter over quarter on iOS and 45% on Google Play. This pushed Entertainment up one spot to 2nd place on the worldwide iOS category rankings and two spots to 3rd place on Google Play, its highest ever position in both stores. Video streaming apps drove the category in both stores as consumers increasingly see value in consuming content on mobile apps. On iOS, Tencent Video experienced the highest quarter over quarter share change in the Entertainment category in Q3 2017, followed by Youku and STARZ. On Google Play, HBO Now had the highest share change followed by Netflix and STARZ.

iOS and Google Play’s record setting performance in Q3 2017 for both downloads and consumer spend clearly demonstrates that the already massive worldwide app economy is showing no signs of slowing down. Between the continuing influx of new smartphone users in emerging markets to the increasing spend of more seasoned app users, mobile apps are still just scratching the surface of their overall potential. In fact, we forecast that worldwide downloads will reach nearly 240 billion and consumer spend will exceed $100 billion in 2021 on iOS and Google Play combined.