The global smartphone market continued its recovery in the second half of 2020, ending the year with 4.7% year-over-year growth in Q4 2020 compared to Q4 2019. This is the first time since Q3 2019 that the smartphone market grew YoY in a quarter.

However, the strong Q4 performance stands in stark contrast to the severe impact of the global pandemic to the smartphone market in Q1 and Q2 2020 according to Omdia’s latest Smartphone Tracker. 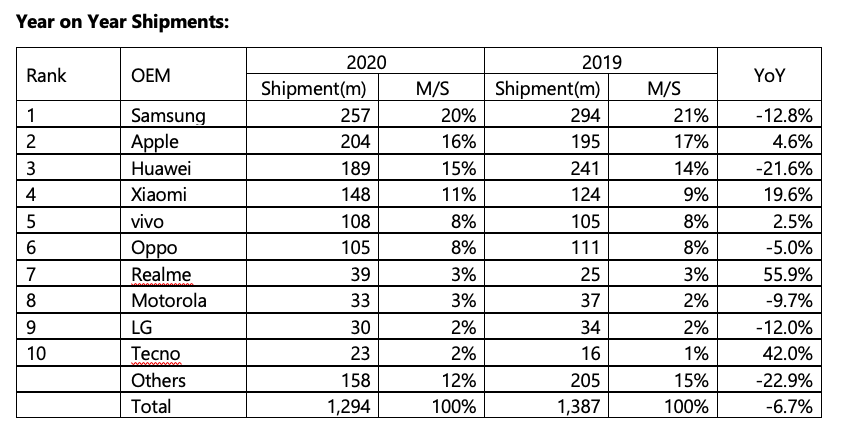 Apple was the leading OEM in Q4’20 shipping 84.5 million units, up 20.5 percent compared to Q4 2019. For the year, Apple shipped 204 million units or 4.6 percent more than in 2019.  Apple shipping its first ever 5G-enabled iPhone helped unit shipment growth in Q4, which was critical in helping Apple generate a modest year-on-year growth.

Apple today announced the highest iPhone revenue in a quarter, increased 17% year over year. This was caused by the delay of the iPhone, which was normally released in the third quarter, but this year iPhone 12 series started shipping in the fourth quarter. In fact, the combined revenue of the third and fourth quarters increased 3% compared to the previous year.

In second spot, Samsung shipped 62.2 million units, down 11.1 percent compared to Q4 2019. Samsung’s annual shipments reached 257 million units, the lowest volume since 2013. The pandemic had a significant impact on Samsung in Q1 and Q2 of last year, leaving the company too big a hill to climb to exit the year in positive territory, compared to 2019. Samsung could also not sustain momentum from a positive Q3 2020 into Q4.

Xiaomi reached third place in Q4 2020, shipping 47.2 million units – up 44.5 percent compared to Q4 2019. For the year, the company shipped 148.3 million units, the biggest shipments ever for Xiaomi. Compared to 2019, Xiaomi was able to increase unit shipments by 19.6 percent. The company continues to inch closer to the 50 million units per quarter mark, which has only been breached by Samsung, Apple and Huawei in recent quarters.

Xiaomi, vivo and Oppo are beneficiaries of Huawei’s challenging 2020.

Huawei continues to feel the impact of US sanctions on its smartphone business – forcing the company out of the Top 5 OEMs.

There continues to be no end in sight for the US technology ban which would ease pressure on the company. Considering the uncertainty of its smartphone business future, the company sold off its Honor sub-brand in Q4 2020. The new entity just announced its first device as well as partnerships with suppliers like Qualcomm, indicating that stand-alone Honor is not subject to the same ban as its previous parent company.