You are at:Home»Media & Content»Global study shows which kinds of ads consumers trust
By Paul Skeldon on 18 May 2021 Media & Content, Marketing & Promotion, News

A YouGov study of people in 17 countries and regions on attitudes to how trustworthy they find advertising to be across popular media channels reveals large differences between the low levels of trust held by several European countries and the United States in newer media channels versus significantly higher levels of credibility given to them in developing markets like Mexico and Asia-Pacific.

On the other hand, Britons are significantly less likely to find advertising on websites (18%) and social media (10%) to be trustworthy. It’s not just the UK where people are skeptical of newer forms of advertising. Social media ads are the least credible form of advertising worldwide, with just 25% of the global sample saying they trust these types of ads and nine out of the 17 markets sitting below this global average. 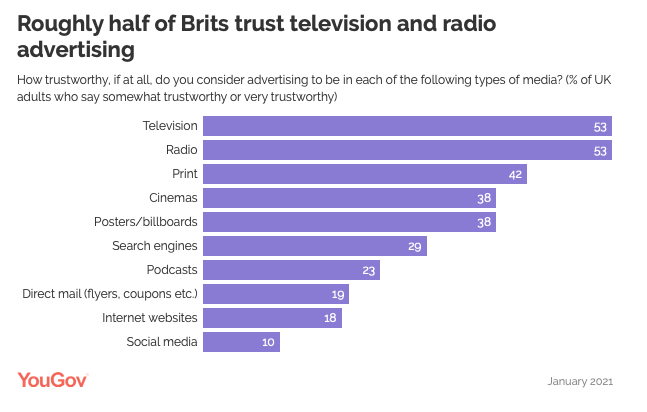 Americans’ trust in advertising resembles that of the UK but to a less pointed degree. In the US, it is television, print, and radio which command the most trust but none of them muster the trust of more than half the population. And while Americans distrust social media and websites more than they trust them, they are significantly more likely to give them credibility than Britons.

In places such as India, Mexico, Indonesia, and the UAE, advertising on newer media channels is held in higher regard than among the rest of the world. This is especially true for social media advertising with roughly two in five people in each of these markets saying they trust the ads they see on these platforms.

Other forms of digital media like websites and search engines – which Americans and Britons tend to not trust – manage to garner higher levels of credibility at the global level (38% and 41%, respectively.) 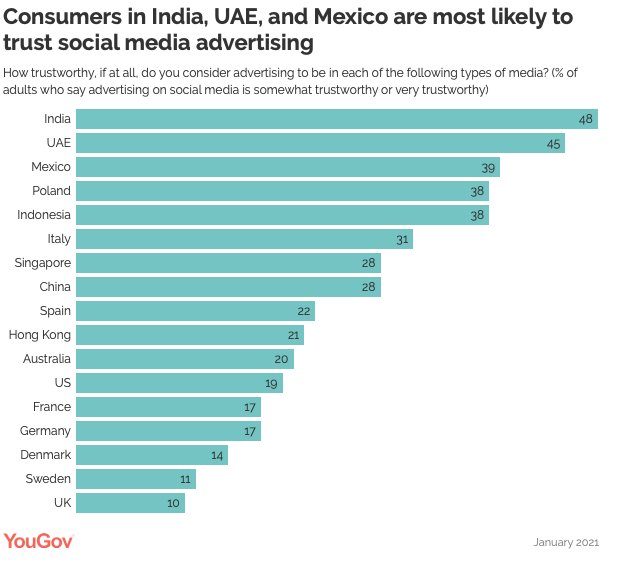 Other forms of digital media like websites and search engines – which Americans and Britons tend to not trust – manage to garner higher levels of credibility at the global level (38% and 41%, respectively

For free insights into how media landscapes across the world have changed, download YouGov’s new International Media Consumption 2021 Report