2021 was a boom year for mobile, with mobile-first markets spending as much as a third of their waking hours – 3.8 trillion hours, to be precise – on device, downloading 230 billion apps and spending $170bn worldwide on mobile.

So finds the State of Mobile 2021 report from App Annie, which points to a range of trends in mobile use that emerged across 2021 – and which will shape how 2022 plays out. 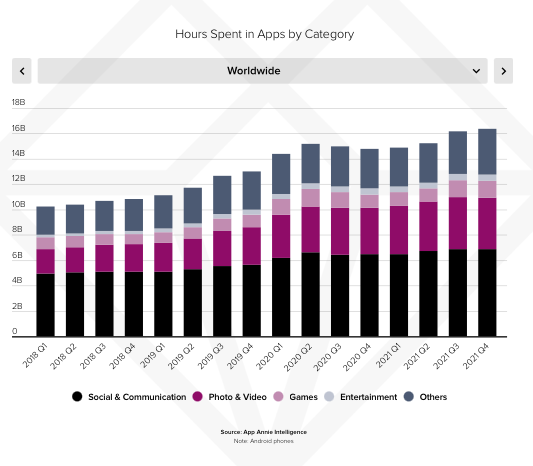 By far the biggest draw for mobile has been social, photo and video apps, with 70% of all minutes spent on mobile spent doing one or other of these activities. The pandemic accelerated existing mobile habits, which have solidified in 2021, says the report and, while social dominates for time spent globally, regional differences in app preferences highlight unique market differences.

In fact, live streaming across social is a massive growth area. In 2021, time spent in the top 25 live streaming apps outpaced the social market overall year over year by a factor of 9 — YoY growth of 40% compared to all social apps at 5%.

Social apps are the linchpin to connection in our mobile-first world.  Live streaming apps are changing the game — providing opportunities  for live shopping, content creator compensation, creative empowerment and the rise of authenticity in social apps.

TikTok was a standout winner in per user engagement among the top 5 social apps commanding the most time spent in 2021.

It is notable that TikTok has seen the greatest in depth of engagement over four years and had a standout year in 2021, off the back of an already record-breaking 2020.

Meta properties in India benefited from the TikTok ban in 2021, with engagement deepening in both Facebook and Instagram by 15% and 35% respectively.

A key emerging trend in the social sector, which is likely to have a spill-over effect on the wider mobile world, are avatar apps. Demand for avatar social apps has grown amidst interest in metaverses  in 2021, particularly H2.

Game on for gaming

Gaming is one of the biggest spending sectors on mobile and the increased use seen across 2021 has added around $16bn in revenue to the mobile gaming sector – bringing the total consumer spend on gaming to $116bn for the year.

In 2021, hit games such as Roblox and Genshin Impact saw further growth in consumer spend as mobile games are now capable of offering console-like graphics and gameplay experiences. The gaming scene in China has seen renewed excitement over the release of Harry Potter Magic Awakened and League of Legends: Wild Rift in H2 2021, and we expect these to further occupy the top revenue charts in the coming months and further add to global mobile gaming growth.

Hypercasual games like Bridge Race and Hair Challenge were key downloads driver, but 2021 saw some well known IPs such as Pokémon UNITE, and PUBG: NEW STATE making major gains in downloads and usage.

Among the countries with the fastest growth were Indonesia, Singapore and Brazil at 52%, 46% and 45% growth YoY, respectively.

APAC-HQ’d shopping apps have grown international downloads, shifting market share to non-native-based brands in many regions. Across AMER, overseas publishers grew in share of downloads. In the US, however, the mobile shopping market continued to be dominated by US-based brands (66% share), with only 34% from non-domestic brands.

Still, US-based apps lost 5% share of downloads to overseas publishers, driven by China, Canada, Australia, and Japan. In Brazil, Overseas-HQ’d apps dominated 52% of all shopping app downloads in 2021, an increase in share of 11% YoY.

Most countries in Asia saw growth in time spent among the top 20 video streaming apps, continuing the momen-tum first seen during the initial stage of the global pan-demic. Conversely, in China, video streaming apps saw substantial declines as consumers increasingly gravitated towards short-form video apps; TikTok and Kwai saw total time spent in app grow by 205% and 225% since 2019, respectively.

Indonesia and Russia saw the highest increases in total hours spent across their video streaming apps in 2021, with India’s MX Player being the primary driver of growth.

Despite access to bigger screens, consumers are still watching content on mobile. Competition is heating up in the space and exclusive content is a way of drawing in new viewer

As more people were forced indoors due to COVID-19 and continuing to remain at home throughout 2021, demand for video streaming apps surged. To remain competitive, providers leveraged exclusive content releases to capture market share.

The launch of Made for Love (TV Series) coincided with a 61% increase in downloads of the HBO Max app, while Squid Game’s release in September 2021 saw a 6% boost for Netflix app downloads.

The demand among viewers for exclusive content is stronger than ever. Knowing what original content resonates with the target audience is crucial to staying ahead in an increasingly crowded space.

Netflix has the largest global footprint among video streaming platforms and a robust audience in each, with over 1 million local downloads in 60+ countries.

Exclusive content, strategically timed releases, and overseas expansion are fuelling growth in the video streaming sector — a mobile-first strategy is needed to succeed.

The unabated growth in consumer spend was primarily driven by the US, Japan, the UK and China, the four largest markets in 2021.

For the US, Germany, Indonesia, and Japan, consumer spend more than doubled since 2018. Despite its population size, India is one region that saw declining consumer spend on dating apps, although it is still up 18% since 2018. India is a unique market where, although users of dating apps may not be spending heavily, more than 75% of Indian daters have started going on hobby dates and more than 50% are thinking of dating as a way to explore. Mobile is perfectly positioned  to capture budding demand in this sector.

Users of Dating Apps With Generationally-Unique User Bases More Likely to Skew Male in Most Regions Except for AustraliaTaimi, Hily, and Tinder tend to be more popular among Gen Z in the US.

Gen X and Baby Boomers in North America and Australia tend to use ‘mobile-forced’ dating apps; among those, Zooskand Match.com tend to be popular. SCRUFF, Bermuda, and Plenty of Fish Online Dating bucked the trend and saw popularity among Baby Boomers despite being mobile-first providers.