Games dominate the mobile app business, with consumers spending $100bn of the total $143bn on apps in 2020 on games. In other words, for every dollar spent on iOS and Google Play, games took 70 cents.

According to  App Annie, gaming also dominated the market in terms of downloads, although not to the same extent. 36% of all mobile app downloads in 2020 were games – that’s 80 billion downloads out of 218 billion overall.

App Annie estimates that more than $120 billion will be spent on mobile gaming this year (up 20% from 2020). That’s 50% bigger than the console, PC, Mac, and handheld sectors combined.

The mobile games market is home to two quite distinct genres of game. Casual titles, which tend to be largely free to download and monetize through ads. These games are ‘snacked on’ by a vast user base of casual players.

‘Core’ games are far more likely to monetize through in-app purchases as part of the core gameplay loop. They attract a more committed user base, typically playing for much longer session times.

Casual games led the way in terms of downloads. They comprise 78% of all game downloads, against 20% for ‘core’ games and 2% for Casino.

Conversely, core gamers generate 66% of total revenue. That is two thirds of revenue from titles that accounted for just a fifth of all downloads. This compares to 23% of revenue from casual games and 11% from casino games. 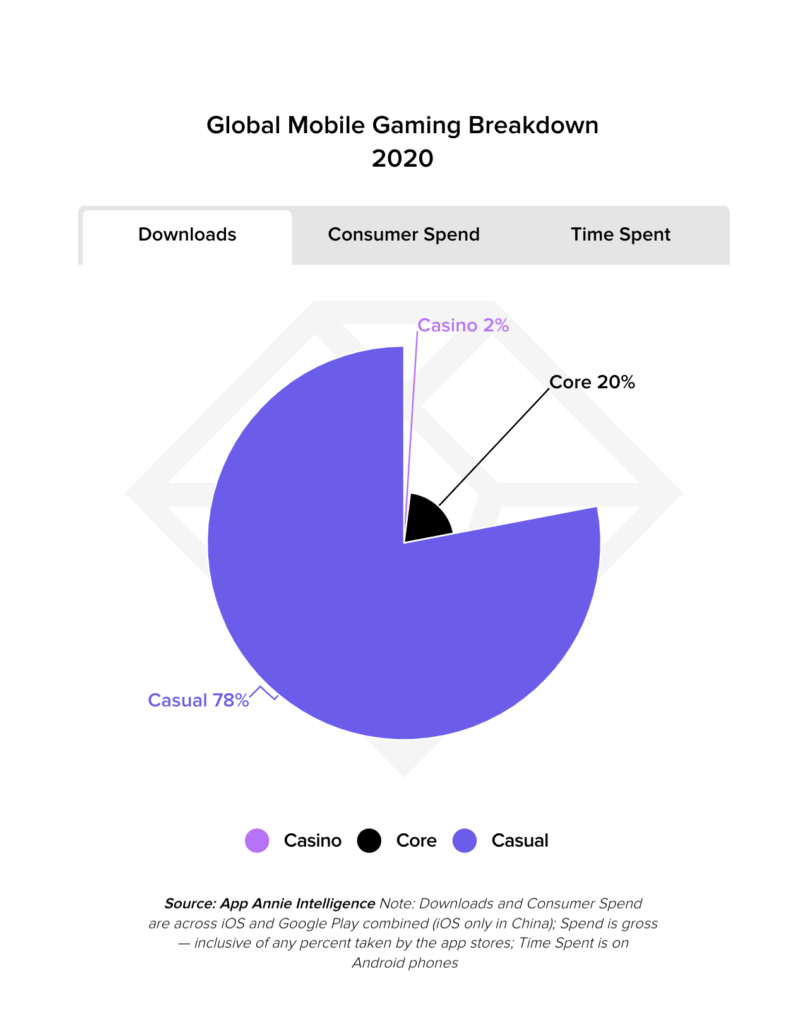 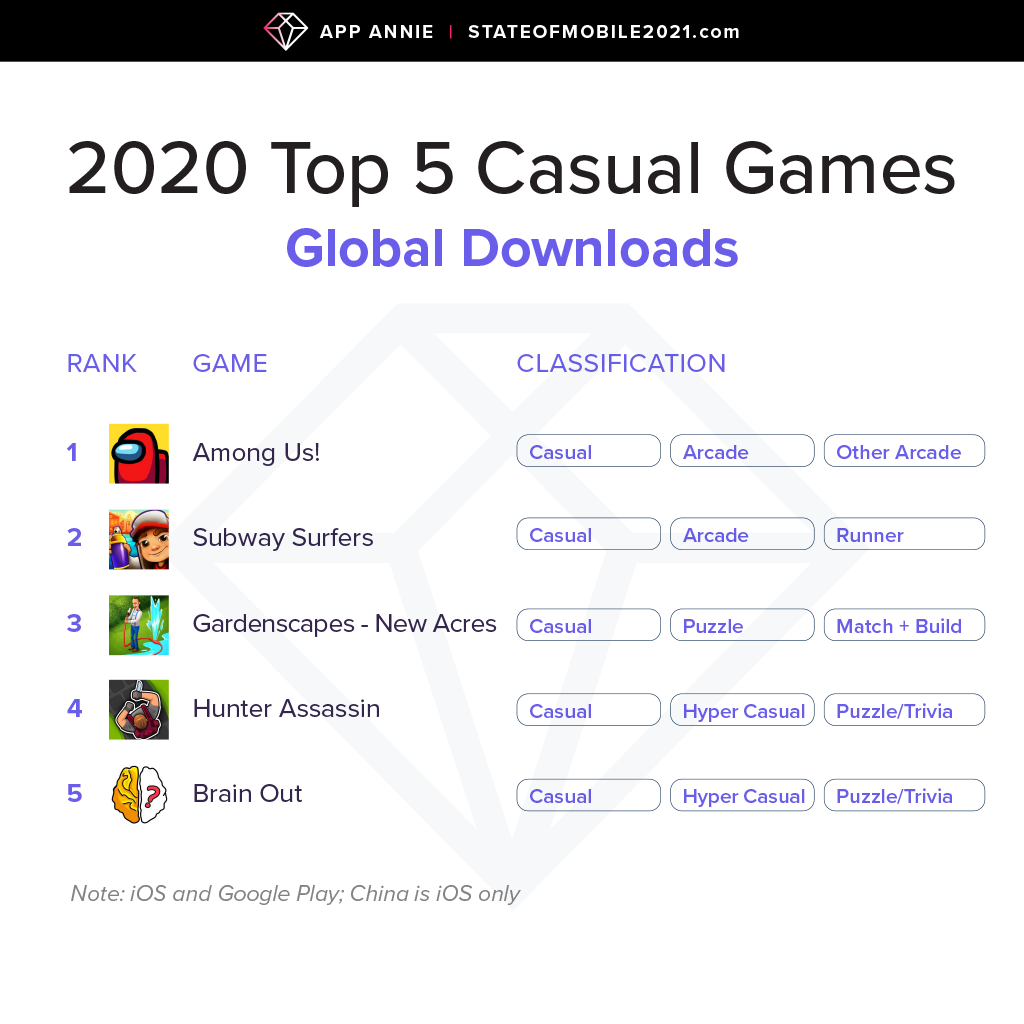 Without doubt, the standout game of 2020 was Among Us. It was the #1 casual title of 2020 by downloads and #3 by average monthly active users.

Among Us performed modestly until it was adopted by key influencers on the gaming TV channel Twitch in July 2020. Shortly after, the game enjoyed a huge spike. According to our research it had about 295 million monthly active users in October 2020.

As a result, Among Us dominated our breakout games chart in 2020. By downloads, it was the #1 game by year-over-year growth in downloads  in Argentina, Canada, US, Mexico, Australia, South Korea and the UK. 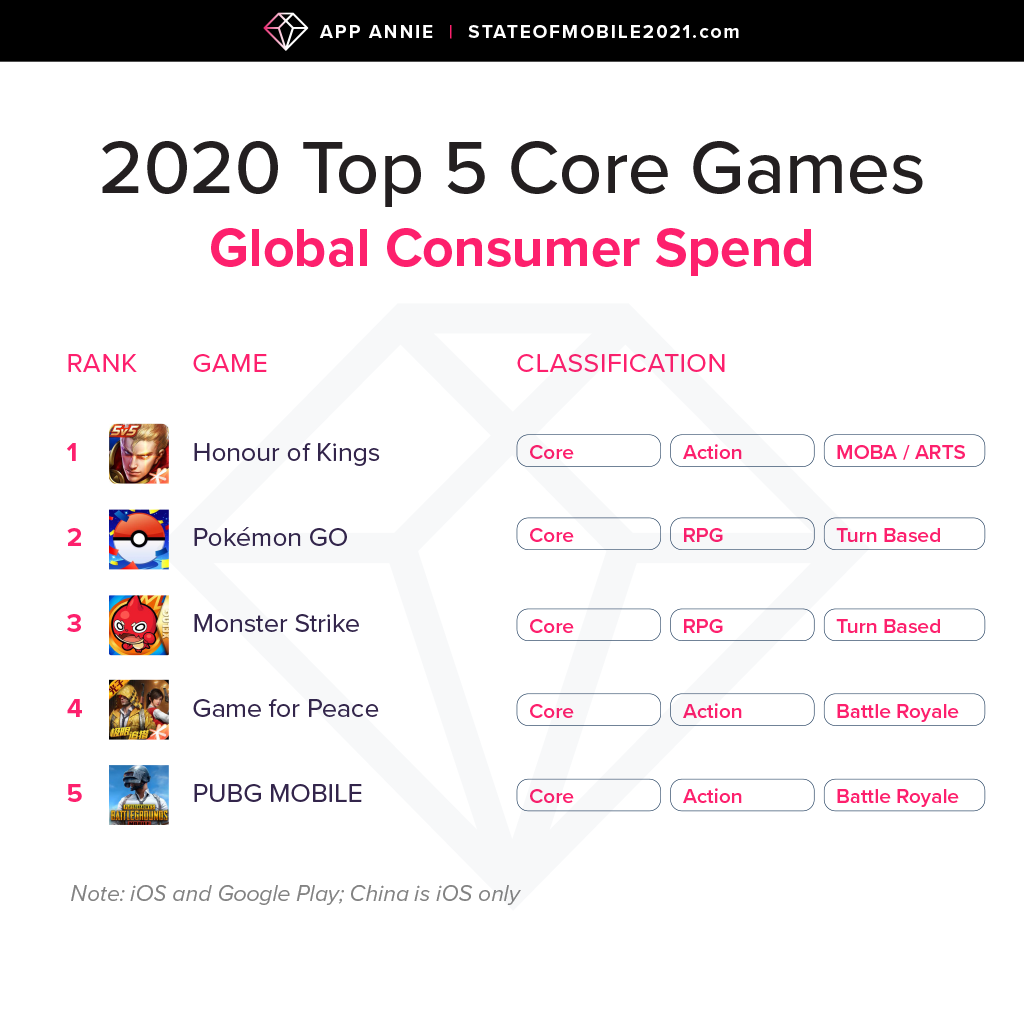 The #1 title in the core gaming market for consumer spend was Honour of Kings, a multiplayer role-playing battle title made by China’s Tencent. As a core game, it leverages strategic gameplay mechanics like leader boards and social assets and monetization features like battle pass and consumables to drive stickiness, and ultimately revenue.

Pokémon GO also had an excellent year, finishing second by consumer spend in the core games chart. This was quite an achievement given that the game is typically played by walking around outside — not easy in a year of lockdowns.

However, US developer Niantic moved quickly to give players ways to collect Pokémon without having to travel.

Another outstanding games performer in terms of time spent was Roblox. It topped the ‘breakout games’ chart for playing hours in Germany, Russia, UK, South Korea, Brazil, Canada, Mexico and US.

Roblox is more like a platform than a single game. Players can meet and socialise and then choose to play a vast range of games-within-a-game. They can also create their own games – using the creation engine Roblox Studio – and receive a cut of any profits. In fact, Roblox estimated that players earned a collective $250 million in 2020.The company is now preparing for an IPO with a valuation of up to $30 billion.

Lexi Sydow, Senior Market Insights Manager at App Annie comments: “80 billion games were downloaded in 2020, outpacing overall download growth by 2.5x. Annual app store consumer spend in games topped $100 billion, and accounted for 7 of every 10 dollars spent across the app stores. Strategic collaborations with popular musicians in battle royale games significantly boosted user acquisition efforts by providing virtual concerts in a year largely without live music. Advertising remained a strong avenue for monetization of mobile games in 2020 despite a softening of demand in the advertising industry overall. In fact, mobile ads helped bolster the ad industry overall in 2020, and gaming was a major contributor. Fullscreen and rewarded ads contributed 80% of gaming revenue on MoPub’s Exchange. We also saw user engagement with game ads reach the highest levels seen yet with impressions per daily active users up 51% year over year on ironSource’s ad mediation platform. More consumers than ever before are gamers — seeking entertainment, connection and fun while socially distant in 2020, all from their portable gaming console: their mobile phone.”