Data released by Barclaycard as part of its latest Contactless Spending Index shows that mobile and wearable payments are surging in popularity, seeing the highest growth rates of any form of ‘touch-and-go’ paymenttechnology.

The amount spent using Barclaycard’s Android Contactless Mobile facility has increased 365 per cent year-on-year*, while spending via bPay – a unique, flexible payments chip that can be embedded into a variety of products such as watches and jewellery – jumped 129 per cent. The spike in usage of mobile and wearable payments indicates not only an increased demand by consumers to pay quickly and easily, but also a desire to opt for a contactless payment method which best suits their needs.

Overall, contactless payments, including those made on a credit and debit card, have seen continued growth over the last 12 months, with a 79 per cent uplift in spending. With ‘touch and go’ now accounting for more than six in ten (62 per cent) of electronic transactions up to the £30 spending limit, this latest data demonstrates just how ubiquitous the technology has become.

Cities outside London, where Barclaycard first introduced contactless payments in 2007, continue to see the highest rates of growth. The biggest leaps in annual spend were in Belfast, with a 60 per cent rise, York (up 59 per cent) and Newcastle-upon-Tyne (up 56 per cent). 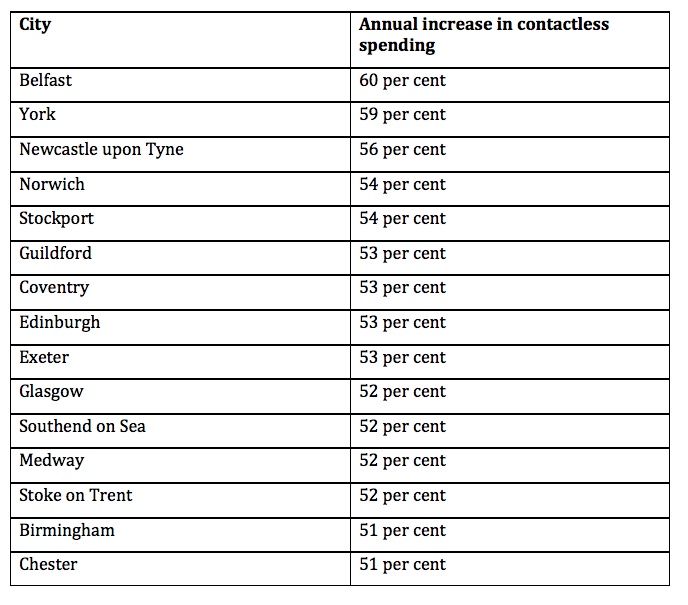 Railways and car parks lead the way on spending 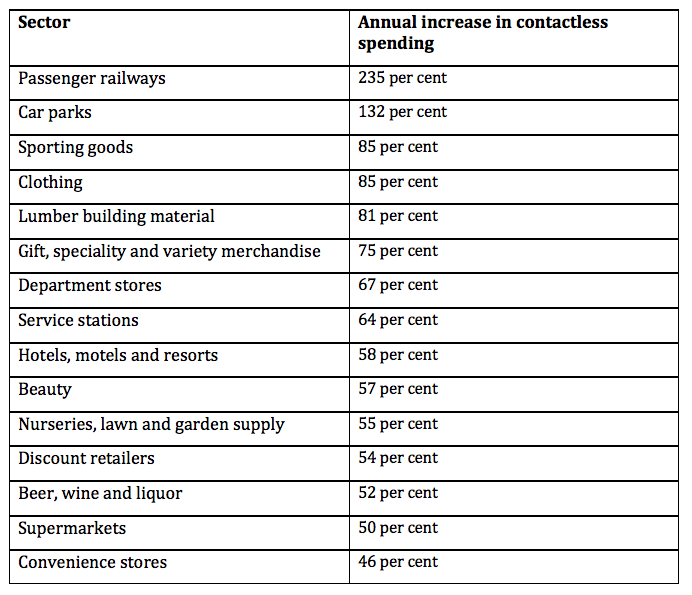 The high growth rate among transport merchants is testament to the benefits of contactless payments for those on-the-go. Travel is an area where speed and convenience are key for consumers: time is of the essence when rushing to board a train, with ’touch and go’ saving an average of seven seconds per transaction compared to Chip and PIN and 15 when compared to cash.

In London, the roll-out of contactless across the Transport for London travel network from 2012 has played a key role in driving adoption. Other transport operators across the country are now following suit and integrating ‘touch and go’ technology to allow commuters to pay quickly and easily – for instance, bPay recently partnered with Plymouth CityBus to enable commuters to pay for their journeys using contactless across its services.

Adam Herson, Business Development Director, Barclaycard Mobile Payments, says: “The surge in popularity of wearable and mobile payments creates exciting opportunities for shoppers and brands alike. Consumers can now choose the type of accessory or device they want and match it to their lifestyle or fashion taste, all while enjoying the speed, ease and convenience that contactless brings.

“Barclaycard introduced contactless payments to the UK in 2007, and ever since we’ve been driving the innovation and adoption of the technology. In the last 12 months, we’ve introduced the world’s first contactless car key with DS Automobiles, and we’re also working with many brands to embed bPay chips into everyday products, to allow their customers to pay quickly and easily.”

Additional research from Barclaycard’s ‘Time is Money’ report found that ‘touch and go’ spending is set to rocket 317 per cent by 2021, with contactless payments expected to save UK shoppers almost £1 billion worth of time over the same period**. The research also showed that two in five retailers who accept contactless now only accept card payments or plan to become completely cash-free in the next five years.