Business landline numbers fell 370,000 in a year to 4.98 million, reveals the latest Ofcom data[1]. As recently as 2013 there were more than eight million in the UK’s office and workplaces.

Numbers are predicted to fall below two million in spring 2024, and drop under one million in early 2026.

The decline of the office landline comes as businesses replace fixed lines with internet-based communications like VOIP. 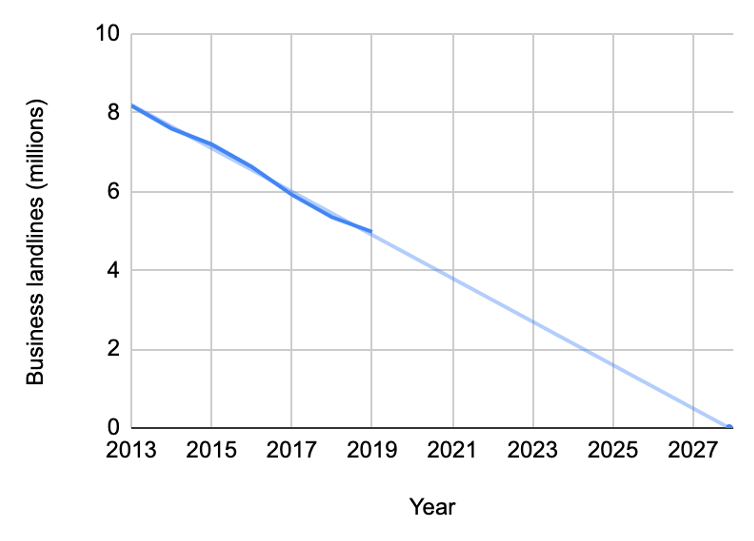 Business communications service Ringover Group has seen demand soar 230% in the past year as millions of users in Europe worked from home during lockdown.

Renaud Charvet, CEO at Ringover Group, says: “The office landline has kept businesses running for almost a hundred years, so it will be quite a milestone when the last one is terminated.

“Few people should mourn their demise, however, as the alternatives give businesses a huge opportunity to turn a standard business phone into a real productivity tool designed for modern workers.

“With millions of people working from home, the office landline looks increasingly redundant, and the data suggests that they will only be with us for another six years or so.

“We have seen a dramatic growth in demand for telephone systems that let employees work where they want.

“Businesses also value the convenience that comes from having a suite of essential office functions accessible from within one easy-to-use app.”

Ringover is aimed at SMEs and mid-cap companies and includes all the features of an IPBX (Internet Private Branch Exchange), including call forwarding and transfer, and multi-party conference. Users can call 110+ destinations worldwide from a computer or smartphone.

The software allows users to assign landline or mobile numbers to 65 destinations, to switch unlimited calls to 110 sites, record and transcribe calls, or access an interactive voice server. Other functions include click to call, SMS sending, and fax-to-mail options.

Ringover links up with applications such as Salesforce, HubSpot, Pipedrive, Zendesk, Zoho, Sellsy and Freshdesk, and can also integrate its functions via different APIs. Ringover stands above  its competitors due to its advanced analytics that gives managers visibility of their teams, effectively boosting their organisation’s productivity.