The amalgamation of over-the-top (OTT) content into pay-TV offerings will help pay-TV businesses to enhance their service proposition and drive revenue in the coming years, says GlobalData, a leading data and analytics company.

According to GlobalData pay-TV Forecast Pack, the adoption rate of OTT video platforms is increasing across all geographies and has built pressure on traditional pay-TV operators to create interactive content library, provide on-demand video, and update their portfolio with HD and 4K content. 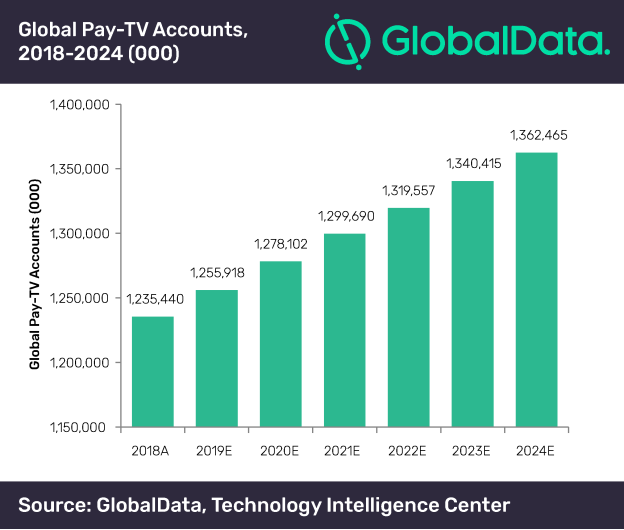 Antariksh Raut, Senior Analyst of Telecoms Market Data & Intelligence at GlobalData, explains: “Increasing broadband penetration will be an important driver for the growing OTT video segment. Many governments have sponsored high speed broadband initiatives, which continue to help expand broadband coverage and adoption, which is critical for OTT video success.”

Even though the number of pay-TV accounts is expected to rise in the forecast period, mainly fuelled by the increasing adoption rate in developing APAC countries, the total pay-TV revenue is expected to decline from US$219.9bn in 2018 to US$210.9bn in 2024 due to the ongoing cord-cutting trend across developed economies.

A number of pay-TV operators have launched their own OTT video services to maintain their market position and enhance their existing offerings with OTT features. However, premium subscription video-on-demand (SVoD) platforms such as Netflix, Amazon, HBO Now are gaining more relevance with their international and local content portfolio.

Raut continues: “OTT service providers are increasing their content budgets to build attractive content offerings tailored for the markets where they operate. For Instance, OTT service provider Netflix over the last several years has been heavily investing to produce films and shows in local language of country of operation.

“Adding live and pay-TV channels is also gaining relevance where the competition between pay-TV and OTT service providers is increasing. For Instance, Hotstar, an OTT video platform in India, provides access to live sports and other broadcast channels along with its own content library comprising of movies and web series.”

GlobalData’s research reveals that North America is the largest and most mature SVoD market worldwide, with the US accounting for an estimated 71% of the total subscriptions in the Americas at year-end 2019. The US market is home to some of the leading SVoD platforms globally such as Netflix, Amazon Prime Video, HBO, and Fox.