New data shows that when marketers don’t message new opt-in app users, they are wasting 95 cents of every dollar spent acquiring them as only five percent continue to use those apps 90 days after first open.

Considering the high cost of mobile app user acquisition, not only does this become expensive very quickly, it’s an inefficient and unsustainable way to achieve mobile growth.

Not only is sending zero push notifications a massive waste of user acquisition investments, it ignores an important and direct channel to engage users who have opted in, as well as the future customer value that could be generated if they were actively engaged.

Within reason, concerns about sending too many notifications are unfounded 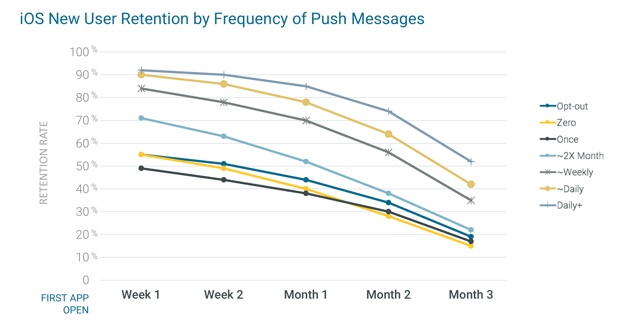 Mapping new user retention rates by the frequency of notifications received displays clear trends that apps can use in formulating messaging strategies. The Android and iOS charts show two strong groupings for 90-day retention levels that point to the need to move to more frequent messaging. Apps should focus on sending push notifications that are more responsive to individuals’ in-app or cross-channel behaviours to grow frequency and the value users receive. To do this successfully, apps must improve their ability to listen for user signals wherever they may take place, and respond relevantly in their moment of need through real-time automation.

In addition, Urban Airship today announced the general availability of its Predictive Churn analytics, which analyses user patterns for each app in order to assess a user’s likelihood to churn before they do. Based on a proprietary machine-learning model trained with more than 10 billion data points, Predictive Churn classifies users into three risk profiles—Low, Medium and High—and makes it easy to take action in Urban Airship or any other business system by making these risk assessments available within:

“The data is clear. App publishers that spend the time and energy to have a thoughtful customer-centric engagement strategy are rewarded with retention rates that are 3-10X times higher than those who don’t. But that’s only the beginning,” said Brett Caine, CEO and president of Urban Airship. “Even apps with high retention rates have room to improve and small gains can have big impacts, which is why we are excited to offer a new end-to-end solution that makes it easier than ever to determine which users are prone to churn and take action while there’s time to retain them.”