You are at:Home»Media & Content»Study reveals how TV networks are capitalising on social audiences
By Paul Skeldon on 19 August 2015 Media & Content, News, TV

Television remains a big cultural driver of conversations and trends in the UK, but the way those conversations are delivered and shared is changing in our current age of social media.

Brandwatch, the leading enterprise social intelligence platform to help marketers prove the ROI of all of their activities through social, has analysed the social media use of the five terrestrial broadcast networks to see how these channels use social media networks to connect and converse with their core user base.

Overall BBC Two emerged as the most social-savvy of the networks, followed shortly by ITV. BBC One and Channel 4 ranked slightly lower, and the list was rounded out with Channel 5.

Knowing when your audiences want to engage on social media is key to social success, and many broadcast networks are hitting the mark well with their response rates. Forty-seven per cent of all brand responses to tweets occurred within the first 10 minutes of being posted, and by one hour, 73 per cent had been responded to.

Channel 4 has the fastest average response rate for tweets, sitting at a mere 2.9 minutes. BBC Two follows with 8.5 minutes, and BBC One responds in an average of 22.8 minutes – granted they receive the highest number of average daily mentions at 1,620. Channel 5 has a 62.71 minute average response time, and ITV finishes with a 415 minute response time.

Where are people talking?

The majority of conversations mentioning the terrestrial networks occur on Twitter, with users responding in real time to the content they see on TV. However the analysis from Brandwatch highlights that brands should underestimate the value of conversations on Facebook, or other channels such as blogs, or news sites.

“Interestingly, networks like Facebook have the potential to reach a much wider audience than the average tweets. So savvy broadcast channels should consider Facebook to be the best way of spreading more strategic content – such as campaign messages, while Twitter is the best place to generate real-time conversations on their shows with fans.” 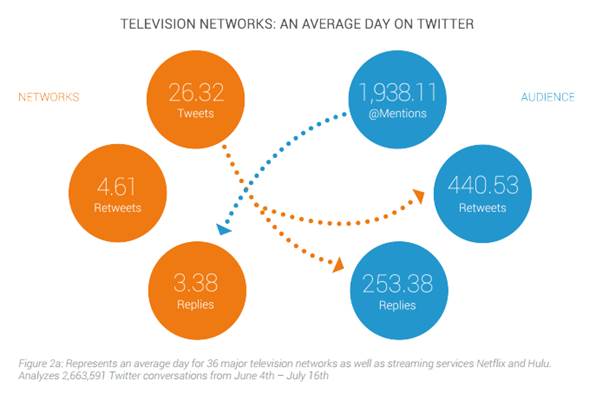 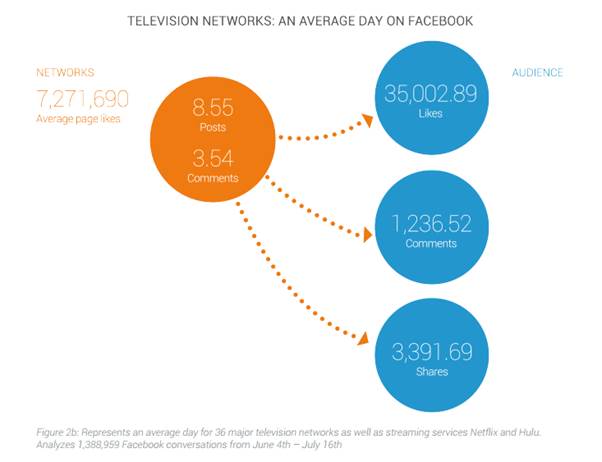 What works on broadcast social media? 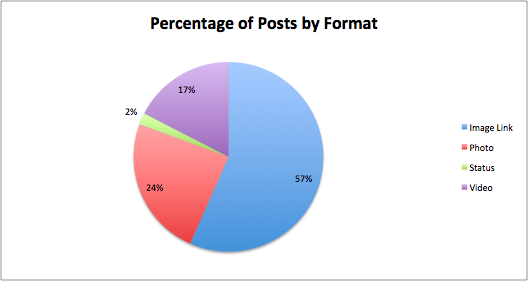 While video content might seem the logical choice of content for a television network to share, image links actually perform best on Facebook, as users are keen to use the platform as a source to discover more about their favourite shows. At 5,220 average Facebook likes per post, they achieve more than three times the average number of likes per video post (1,626). Image posts also perform better than videos, with 2,133 likes on average, though they do receive fewer shares than video. Status updates perform lowest across the board.