Developing an app is a challenging process, so the mobile experts at comparison site money.co.uk have created a comparison tool to help developers and entrepreneurs make their apps more successful.

For its ‘Anatomy of a successful apps’ study, money.co.uk’s expert team studied data from over 7,000 apps across 22 categories, analysing key factors such as the number of reviews, average ratings, and price paid by users together with technical information to determine which apps perform best in the app store.

The new mobile app comparison tool allows developers to input their app details and have it measured against their competition, providing a starting point of reference to know what the competition is like for the industry they are entering and how to optimise their app to do well on the app store.

The study shows that new apps need at least 12,000+ reviews to appear on the app store’s top listings page, and should not cost more than $2.33 in order to be competitive. The technical information analysed reveals that apps should be supported by at least 37 devices, available in seven languages, and not use more than 116 MB of space.

The data goes on to show that app descriptions perform best when using short titles—no more than five 5 words with descriptions that include a minimum of three images and 267 words. The technical information analysed reveals that apps should be supported by at least 37 devices, available in seven languages, and not use more than 116 MB of space. 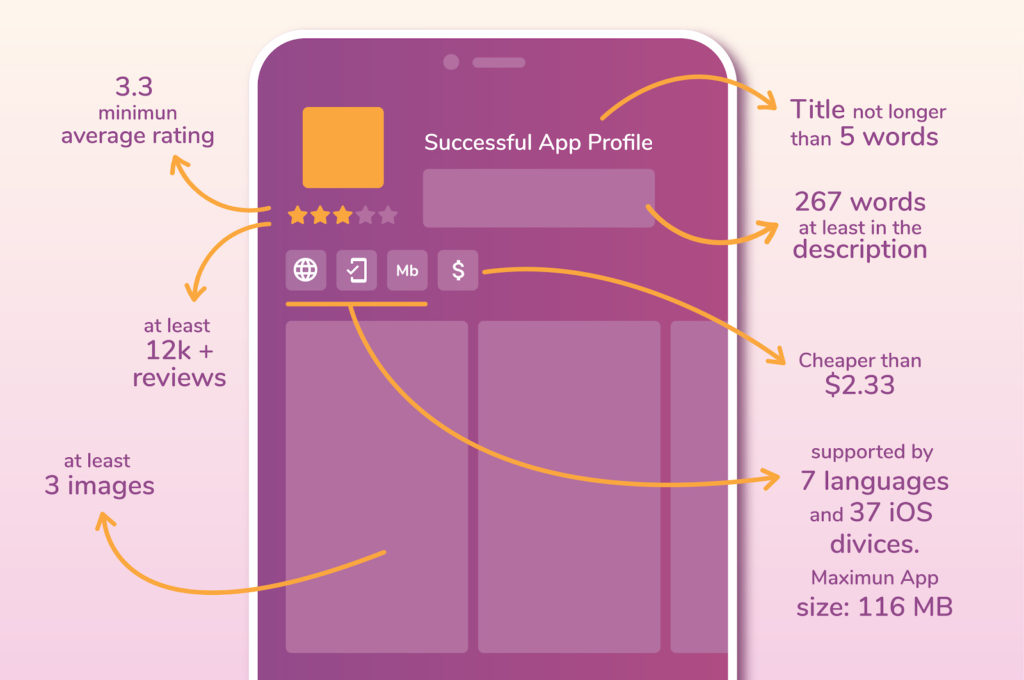 The money.co.uk study also looks at the correlation between the average price paid and the user satisfaction (average ratings), showing that productivity and music apps have the best correlation between both. These app categories have the highest average ratings overall (4.0) and they are among the top five types of apps users consider worth spending their money on (the average price paid for music and productivity apps is $4.84 and $4.33 respectively).

By analysing the top types of apps people spend the most on, we see that business and productivity apps are the most promising categories, likely because of the rise in  remote-working due to the pandemic. These apps have become an essential tool to increase efficiency and productivity at work, which explains their high average ratings and prices.

The top 5 apps people spend the most on:

The medical category ranks the highest by far in terms of the average price paid for apps, costing $8.78 on average, or almost four times more than the price app users typically pay. The data might assume that a higher price equates to a higher user satisfaction. Yet the findings indicate that medical apps don’t stand out from the crowd. 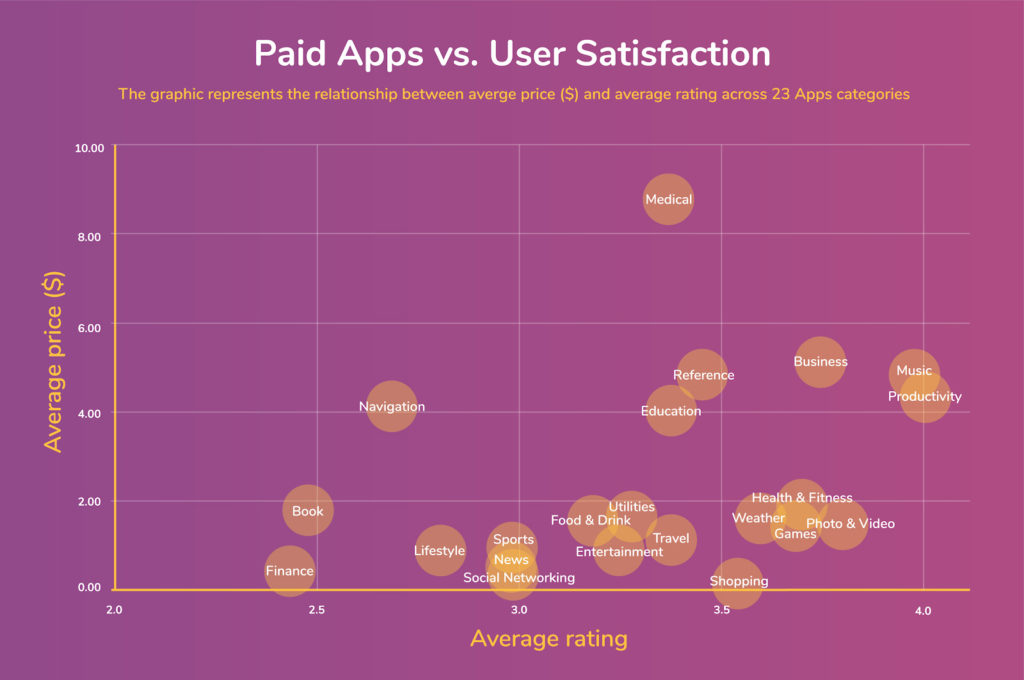 Finance apps receive the lowest average ratings in the app store, and appear to have saturated app stores. While they claim to help users save money, financial apps have an average rating of 2.4 and are struggling to achieve their objectives.

The data also suggests that the book app category is not performing well among mobile users. With an average rating of 2.5, they are the second lowest rated type of apps. A poor user experience is one of the reasons why an app doesn’t succeed: data indicates that reading books on a screen is less satisfying than reading a physical book, and research in many fields indicate that reading from screens makes us read slower, learn and remember less, and sleep worse.

There are many reasons why an app succeeds or fails, but the data from money.co.uk indicates that a successful app has three main factors that determine success: the way it’s marketed, the user experience, and the functionality of the product itself. These three factors must work together to satisfy the end user’s needs. Apps are expected to provide unique value to users, and establish that value quickly and effectively.

The rise of mobile app developers

Mobile phones have become a basic necessity for everyone. There are more than three billion smartphone users in the world, which equates to four out of every ten people being equipped with smart technology on mobile globally.

With the rapid increase of smartphones users, apps have become one of the fastest-growing markets in the IT industry. This creates infinite opportunities, not only for users and businesses, but also for mobile app developers.

Over the past few years, the demand for mobile app developers has skyrocketed, in large part due to rising popularity and demand from consumers. This has made their profession very promising and challenging at the same time. As the mobile developer population has boomed along with the amount of apps in the store, today’s users have millions of apps to choose from. This may ultimately decrease the chances of creating a successful app.