The August 2019 survey by LivePerson, a global leader in conversational commerce solutions, included respondents from the United States, United Kingdom, France, Germany, Japan, and Australia. Among Americans, interest in using messaging to interact with brands rose significantly, from 52% in 2018 to 62% this year.

The European countries surveyed had the highest average demand for messaging, at 65% of respondents. Perhaps not surprisingly, this capability is of most interest to younger demographics, with more than 70% of people 18-34 years old wanting the option to message with businesses.

Consumer messaging capabilities can take many forms, including the native messaging apps of iOS and Android, messaging platforms like WhatsApp and Facebook Messenger, voice assistants such as Alexa, and even branded mobile apps and websites.

The convenience of messaging is shifting consumer preferences, says the report, with 49% of consumers worldwide reporting a higher likelihood of spending more with a brand that offers messaging as a contact option.

Consumers in Australia, the UK, and France report the highest levels of chatbot usage for conversational commerce, with more than 70% of respondents having used one to interact with a brand in the past year; the US and Germany are slightly behind at just over 50%.

Among people who have interacted with chatbots in the past year, 80% used them for customer care, up from 67% the previous year.

In the US, a whopping 90% of consumers “agree” or “strongly agree” that they’re more likely to do business with a company that can answer their questions immediately. Similarly high numbers were found in the other countries surveyed.

People are increasingly using bots for functions beyond traditional customer care; the second most common use case for chatbots in the 2019 survey was “assistance in making a purchase.”

Trust is growing — especially among younger generations. A full 96% of Americans “agreed” or “strongly agreed” with the statement, “I’m more likely to do business with a company that interacts with me in a personalized way (i.e., knows information about me from previous transactions).”

A small majority of consumers feel that personalization is convenient rather than an invasion of privacy. Younger people prefer convenience over privacy relative to older generations.

When assured bots are secure and have useful information available, most people are willing to use them for a wide variety of care and sales use cases.

If a company has gathered information about you in a secure manner, would you feel comfortable using a chatbot that does the following things: 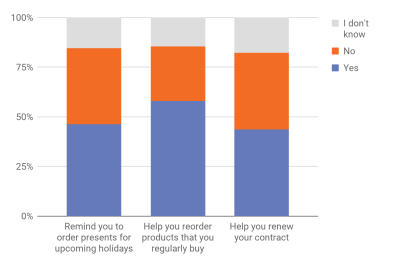 Humans versus bots in conversational commerce

Human representatives are still the default preference for certain situations, but an appetite for bots is growing (especially among younger consumers).

Consumers are gaining confidence in the ability of bots to help with routine tasks. For example, more than 50% of respondents said they’d prefer a bot over a human agent to tell them their account balance or update an address.

Conversely, consumer confidence in bots is lower for more complex tasks — just 15% said they would want a bot to assist with correcting a mistake on a bill.

In alignment with other portions of the survey, younger respondents (ages 18-34) were more likely to cite “good” experiences with bots, while older people (over 34) were more likely to cite “negative” experiences. In fact, the younger group ranks chatbots and human support roughly equally, while the older segment significantly prefers human agents even when it is explicitly stated that a chatbot can help them.

There’s still room for improvement when it comes to user experience. More than half of those surveyed felt “neutral” toward their experiences with brand bot interactions, with about the same amount saying either “positive” or “negative.”

In the US specifically, 20% of survey respondents called their overall feelings toward chatbots “good,” up from 13% in 2018.

An overwhelming majority of consumers wish to be notified whether an agent is a chatbot or human. Fewer than 5% of people in every country said that disclosure of bot identity is “not at all important.”

When it comes to gender, a large majority has no preference or prefers an ungendered name. However, among those who did state a preference, consumers were much more likely to say they’d trust a chatbot with a female name. Interestingly, 7% of men said they’d be more likely to trust a male chatbot, while only 1% of women said the same.

“The Consumer Preferences for Conversational Commerce survey shows that consumers — particularly younger consumers — are increasingly interested in the convenience and ease bots and messaging offer,” explains Manlio Carrelli, executive vice president, Enterprise Business Group at LivePerson. “That said, there is still a lot of room for improvement when it comes to the experiences consumers are having. Savvy brands should pay attention to conversational design to ensure they are not only offering customers their preferred channels of communication, but that they are also meeting and exceeding customer expectations in those channels.”