2020 has been a momentous year for online services. The VAS/DCB industry has benefited from increased demand for online content ranging from entertainment, to information and to technical tools.

But it has also been a year to text compliance of many services, as more users around the world look to DCB and VAS services, so too have the darker forces.

So how did the industry do?

According to the latest study from Empello, video streaming, gaming and mixed content were the dominant types of VAS both in terms of traffic and number of active merchants.

When combined, streaming, games and mixed content services made up 78% of all VAS advertising in 2020. 50% of all merchants provided one of these three services in 2020.

In 2019, 54% of mobile advertising for VAS was delivered by Google Ads. Affiliate networks generated the rest of the advertising traffic. In 2020, we saw Google Ads increase their market share to 62%. We observed this rise in all markets, including those with low average revenue per user – where historically Google Ads had not been financially viable.

Some content providers have shifted towards buying traffic from Google Ads. Others have continued to use affiliate networks that have increasingly begun to generate clicks from social media. In 2020, social media promotions made up 17% of all Empello discoveries, and probably at least 35% of all VAS advertising.

Social media advertising allows affiliates to use highly targeted methods to maximise their conversion rate. However, other types of advertising found on social media are often fraudulent. For example, closed groups and messaging apps are breeding grounds for misleading advertising.

VAS compliance around the world

The VAS/DCB industry across the world in 2020 was 90% compliant. However, Empello observed significant variations in compliance depending on the country and the time of year.

At 99% compliant, the UK had the fewest cases of fraudulent traffic. On the contrary, the three markets with the lowest levels of compliance were: Saudi Arabia: 60% compliant; South Africa: 61% compliant; and  Egypt: 76% compliant.

In 2020 FraudScan made approximately 60,000 discoveries that posed a high or medium risk to consumers. Fraudulent traffic drastically reduces consumers’ faith in a brand. For content providers this can lead to being blocked and sanctioned by regulators and operators. This can also put mobile network operators at risk as consumers can choose to switch providers if they feel their network is not doing enough to protect them from fraud. 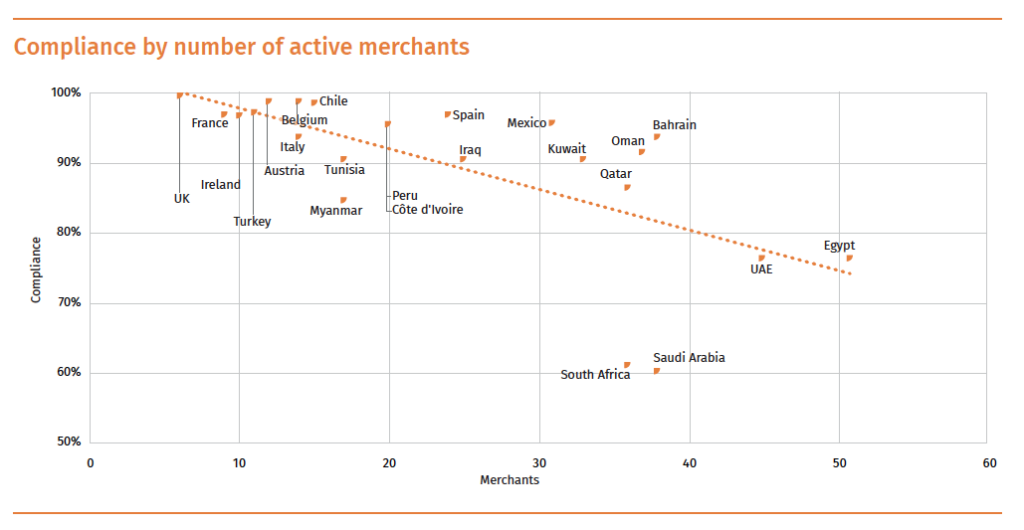 Global compliance remained high throughout 2020. However, Empello says it observed considerable discrepancies between markets. The above graph highlights three key patterns observed in 2020.

Markets like Belgium and the UK have maintained very high levels of compliance throughout the year, while other markets, like Egypt and Myanmar, have made sustained improvements in compliance since the first quarter of 2020.

Saudi Arabia and South Africa have been consistently non-compliant. There is a strong correlation between compliance and number of active merchants in a market, says Empello.

The top three most prevalent compliance issues in 2020 were content locking, misleading flows and incorrect-opt ins. The next few pages will take a closer look at each of these types of fraudulent traffic.