Uruguay is the top-ranking country in Latin America with a Telecoms Maturity Index (TMI) score of 63, followed by Costa Rica (55), Argentina (52) and Brazil (50).

So finds BuddeComm’s recently launched Telecoms Maturity Index (TMI), that analyses the broadband, mobile and fixed Line markets of a country as well as a range of economic parameters to rank it on a scale of 1 to 100 and compare it to its region.

According to the TMI, Uruguay is one of the very few Latin American countries where the local fixed-line market is neither privatised nor liberalised. Antel, the state-owned incumbent, has a monopoly in the provision of local telephony and fixed broadband services.

Other segments of the telecom market have been opened to competition, including international long-distance telephony, mobile telephony, and fixed-wireless broadband. Uruguay has the second highest fixed-line teledensity in Latin America after Costa Rica, and the second highest mobile penetration after Panama.

Uruguay is also one of the regional leaders in other key indicators, such as computers per household and internet access.

Despite liberalisation efforts, Mexico’s telecoms market has remained highly concentrated. The fixed line sector is dominated by the previously government-owned incumbent, Teléfonos de Mexico (Telmex), while the mobile market is dominated by Telmex’s sister company Telcel, which Telmex spun off in 2001. The market share held by these operators is declining as telecoms reform measures take root.

The top two developing markets are Paraguay (21) and El Salvador (20).

Paraguay has considerable potential for telecom market growth, given that the country has the third lowest fixed-line teledensity in South America and the Caribbean, with the seventh lowest GDP per capita. 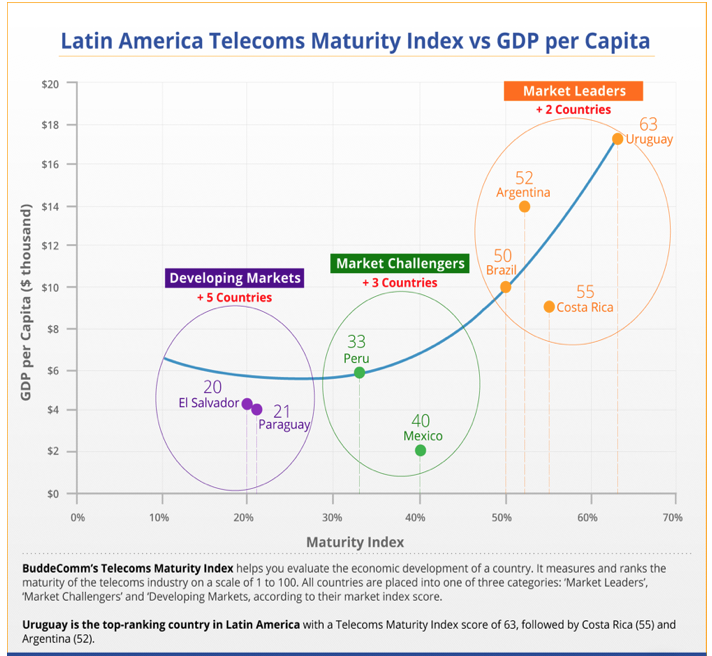 In general terms, most countries in Latin America have poor fixed-line infrastructure being generally lower than in Europe but above those found in Africa and parts of Asia.  Although it can be sufficiently effective in the major cities, in many semi-urban and rural areas it is woefully inadequate. This state of play has helped the development of mobile voice and broadband services.

With regards to 5G the principal operators are unlikely to introduce services until 2021 or 2022. Countries in the region have generally been a step behind the US and key European markets in adopting new mobile technologies.